If you are squeamish about cats doing what they do, or small woodland creatures inside suburban homes, go ahead and close the tab – I won’t mind. 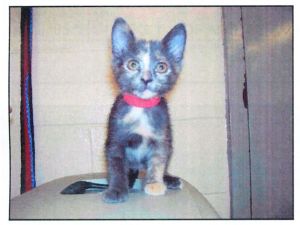 This was Carmen (or San Diego as she was known) when she was just a few weeks old at intake at the Fairfax County Animal Shelter.  And yes – look at those ears.  As I told them, “big ears, good mouser!”

But that photo was when she was so little. When she came home, the ears were still pretty impressive. 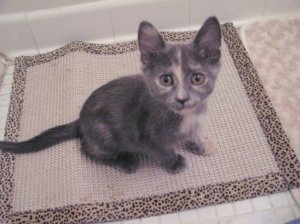 But she grew into her ears and turned into a beautiful cat. 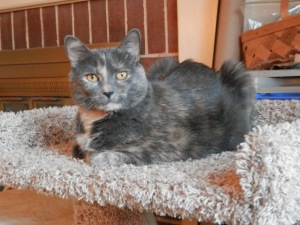 But “big ears, good mouser” has held – and she is impressive.  In the winter, we get the occasional mouse in the house – when it’s 15º outside and definitely not 15º inside, it’s not really surprising that a mouse may seek a warmer spot.  Carmen takes care of this problem with ruthless efficiency.

Day before yesterday (a 15º day) – a mouse got in.  Carmen was on it.  Unfortunately, Lily was assisting.  The mouse got away.  I didn’t worry about it, because I figured if the mouse wasn’t smart enough to leave the house altogether, Carmen would get it.  Carmen was just as determined.

All day yesterday, Carmen was in the basement – looking, waiting, hunting.  I don’t think I’ve ever seen her in “hunter” mode for that long and let me tell you – it’s fascinating.  Anyone with cats knows the swishy tail and dilated pupils.  Zero purring.  An attitude of, “Go away woman, I AM WORKING HERE!!”  It even felt like her body temp went up – she was just in this “on alert” mode that totally took over.

She had no luck, and finally came upstairs and slept hard all night.  To be on high alert for so long was exhausting.

This morning – mission accomplished.  What impresses me about her hunting is that once she’s got the critter – it’s done in  a flash.  No fuss, no muss, no critter bits strewn about the house.  I heard her in the entry hall and went to see and she had carefully placed it where she knew I would find it.  I praised her like crazy, gave her some treats, and then watched the transformation back to relatively relaxed cat.  All her body language changed, she was purring, relaxed, and pretty damn pleased with herself. 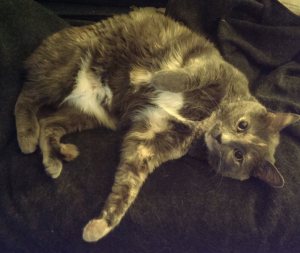 Yeah, I got the mouse.

It’s just amazing to watch her wild instincts take over.  Then we have Lily.  This is her shelter intake picture when she was known as Sylvia, and I’m not sure you can really tell how big her feet were – but they were huge. 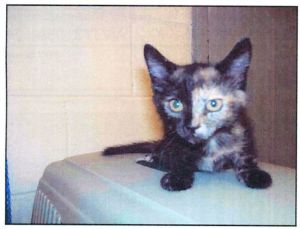 However, Lily just doesn’t have the wild instincts that Carmen has.  At all.

Carmen has tried to teach her.  I once witnessed Carmen get a mouse, call for her sister (with a mouth full of mouse) and then once Lily arrived, Carmen dropped it in front of her as if to say, “OK, here it is – go for it.”  Lily then proceeded to repeatedly bonk the mouse on the head to make it squeak.  (I’m not kidding.) 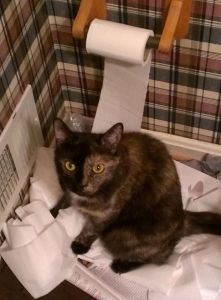 During the chase day before yesterday, Lily actually got the mouse.  She was very excited and went prancing down the hallway like a puppy with a toy.  Then promptly dropped it for Carmen to show, “I GOT IT!” – not really thinking about the fact that once dropped, it was no longer “gotten”…

After Carmen’s success this morning, Lily decided she would show me that yes, she could chase and catch dammit!  I caught her spinning in circles in the kitchen, chasing her tail.  She caught it.  And got a claw caught and I had to rescue her.

Well, they can’t all be mighty hunters, and I wouldn’t have it any other way.