Yes, this one gets it’s own post.  My second day in Williamsburg I headed to Chownings Tavern for dinner and had a terrific time.  Flight of ale – check.  Welsh Rarebit – check.  Salty Virginia Ham on top?  Check.  Enough sodium that I’m probably still retaining water almost two weeks later?  Check, and who cares, cause it was SO good.  They even have their recipe for Welsh Rarebit online here.  (Though they didn’t serve it with the tomatoes in the tavern, which is just as well, because winter tomatoes suck.)

For the flight of ale you get 3 roughly half-sized mugs and I chose Old Stitch, Tavern Ale, and Josiah’s Home brew.  All good, the home brew rather tart to me.  As I’m sitting there stuffing my face with melted cheese and beer, there is a table of three women across from me, the oldest had to be at least in her 70s, and she looks over and asks, “Why do you have three mugs?”  I tell her it’s the flight of ale and it’s three different beers.  I get two thumbs up and a “Good for you!!” in return.  I’m thinking this lady is fun to go out with.

Now, beer and melted cheese and ham was only the beginning.  The actual dinner was “A Dish of Pork” – even without a description, can you really go wrong?  But the description sealed it – melt-in-your-mouth ribs.  Oh. My. God.  These were heavenly.  Fall off the bone and perfect.  However, if you order it, be prepared because it is HUGE.  After the beer and cheese and ham, I could only get through about half of it.  (The rest was very good later at the hotel.)  Overall, a great meal with super nice folks – and more came later because I am a putz.

I headed out for what turned out to be a very soggy evening and by the time I got back to the hotel, my bag was soaked, and as I emptied it out I noticed that my notebook was not there…  I realized that I had left it sitting on the table at the restaurant.  Ack.  It wouldn’t be the end of the world if it was gone forever – I doubt the Great American Novel is in its pages, but when I go places I like to write things down.

So, the next morning I got up and my first stop was back to Chownings just as they opened for lunch.  As I was walking over there, I also realized I was really hungry and they have a good lunch menu, and if nothing else, I’d grab some lunch and see if they found my notebook.  No sooner did I walk through the door to the dining room, I see my notebook on the bar!!  And I might have actually yelled, “YOU FOUND MY NOTEBOOK AND KEPT IT!”

My server from the night before also came over and found me and was very happy to see that I had my notebook back – she said they’d tried to catch me out front the night before but must have just missed me, and that she was sure I’d be back because she’d seen me writing in it the night before.  I was just happy that they’d found it.  I then proceeded to have more beer, more melted cheese (this time without the ham – both ways are very good) and brunswick stew.  (Also very good, especially on a cold day.)  I also realized that as late as I had gotten up, realistically, I was having beer for breakfast…

So, if you find yourself at Chownings and lose something – they will find it and keep it for you.  Again, many thanks to everyone! 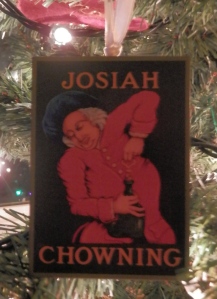 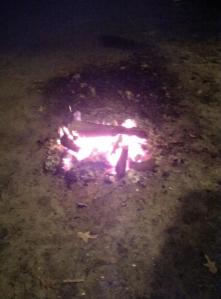 Fire in the street outside Chownings Tavern – the things you could get away with 200 years ago.

Leave a Reply to A Dreamer Cancel reply